Aikido is a Japanese martial art, founded by Master Morihei Ueshiba (1883-1969), where training is used as a `way' (michi) for personal development, self-discipline and spiritual growth. Aikido is an attempt to actualize the `Spirit of Wa (harmony)' by refining technique, heart and ki (life force) through martial art training. Founder Morihei Ueshiba stated that the purpose of Aikido is "not to create and fight enemies, but to harmonize and become one with the ki of the universe". Overall, Aikido is a wonderful educational system to polish oneself and to bring balance to one's mind and body. Aikido practice involves a series of techniques and exercises designed to increase one's body awareness, and to help internalize the principles of movement and energy dynamics. Through persistent and sincere training, one will begin to understand both the internal and the martial aspect of the art.

The ideal in Aikido is not to think of defeating attackers, but rather to be in harmony with them while neutralizing their attacks. Because the nature of Aikido philosophy is to promote harmony and non-conflict, there is no sparring during practice. Instead, training partners help each other learn the proper execution of various forms. Aikido techniques are practiced in a very balanced manner, including: left and right; omote (front) and ura (back); tachiwaza (standing); suwariwaza (sitting); and hanmi-handachiwaza (half-sitting/half-standing). Your Aikido practice will begin with gentler and slower movements appropriate to your level of experience and fitness, and gradually will build up to faster and more challenging techniques. This style of practice loosens the muscles, flexes the joints, improves the posture, and stimulates and enlivens all parts of the body.

The calligraphy on the right is by Adm. Takeshita, a great supporter of O Sensei and Aikido. It is based on "I Ching" and in relation to Aikido can be interpreted as follows: Do not stop moving forward on your path. Keep practising Aikido, and do not take a break from it. Aikido is a lifelong learning path.

A Beginner's Guide to Aikido at VWA 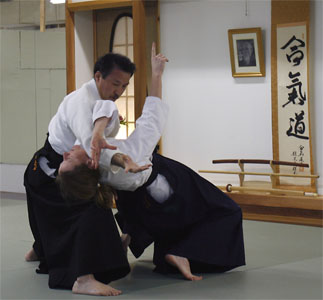 Aikido is a `modern' martial art that we practice in a friendly dojo atmosphere, while still retaining strict manners and martial aspects. In Aikido training, etiquette is as important as the study of physical techniques. Proper execution of etiquette forms not only creates a good atmosphere in the dojo, but also develops your intuition and awareness. Since Aikido is a Japanese martial art, the interactions between the teacher and the students, and among the students, follow the Japanese form. You will not be expected to know all etiquette forms in the beginning, but you will be expected to learn them in a reasonable amount of time.

Aikido training takes place in a hall known as a dojo (place of the way). The dojo is considered a sacred place of learning, and must be kept clean and free of distractions. Behave no differently in a dojo than you would in a church or temple.

Training partners should always be approached with gratitude and respect. They are lending you the use of their bodies to enable you to gain the benefits of Aikido practice.

Bowing is a very important aspect of the Japanese culture. In Aikido, we bow to show respect, honour, and gratitude. There are two ways of bowing: from a kneeling position (more formal), and from a standing position.

LEAVING THE MATS DURING CLASS

Always let the Sensei know if you need to leave the mats.

ALWAYS BE ALERT WHILE ON THE MATS

Careless practice is dangerous and can cause injury. Always be aware of your surroundings.

The proper way to sit during class is in seiza, the formal Japanese sitting posture. A crosslegged sitting position is acceptable if seiza becomes too uncomfortable. In any case, an attentive posture should be maintained at all times. Students should not slouch, lean against walls or sit with legs outstretched.

DO NOT TEACH FELLOW STUDENTS

Unless specifically asked to do so by the Sensei. If you need help during class, discreetly ask the instructor for his/her instruction.

For reasons of safety, respect and courtesy, it is essential that the teacher's instructions be followed exactly. Many Aikido techniques can be dangerous if not practiced properly.

PRACTICE AT A SAFE PACE

Be sensitive to the physical limitations and experience level of your partner and never perform any exercise which you feel is too dangerous for your current physical or technical ability, or that of your partner.

KEEP CONVERSATION TO A MINIMUM

In Aikido, like in other traditional martial arts, learning with the eyes and body is emphasized. Help each other by following the technique with the appropriate body movements rather than with words. If it is necessary to speak, do so in a low voice.

DO NOT WEAR JEWELLERY DURING PRACTICE

Jewellery such as rings, necklaces and ear rings could accidentally catch or be ripped out by a partner during the practice and could pose a risk to you or your practice partner.

DO NOT WEAR FOOTWEAR ON THE MATS

To help prevent dirt from being brought onto the training surface, please wear some kind of footwear when not on the mats.

Cleanliness is a reflection of your attitude toward Aikido, your teacher and your fellow practitioners. Please keep your fingernails and toenails clean and short. Keep your uniform clean and wash it regularly. Footwear should ALWAYS be worn when not on the mats.

IF YOU BECOME SICK, OVERTIRED OR INJURED

If you become unable to continue practice, let your partner know. INFORM THE SENSEI before leaving the mats. If you just need a short rest, move to the edge of the mats and sit quetly watching until you are ready to resume practice.

If you have medical condition or previous injury that may affect your practice, notify the Sensei of this before class starts.

The dogi, or gi is the uniform that students should wear during practice. A Karate-gi or the more durable Judo-gi is preferred. The dogi should be white or natural (unbleached). They may be purchased at a local martial arts supply store. For new members who do not wish to invest in a uniform immediately, it is acceptable to attend the first month of classes in a t-shirt and a pair of track-pants.

Weapons training in Aikido is important in that it helps us learn principles of timing, combative distance, sensitivity and awareness. The training weapons used in Aikido are Bokken (a wooden sword), Jo (a 50 to 54 inch wooden staff), and tanto (a wooden knife). These may be purchased at a local martial arts supply store. It is not essential for new members to buy weapons; however, they are encouraged to participate in weapons classes, even without a Bokken or Jo.

Aikido follows the traditional kyu and dan system of ranking where only white and black belts are worn. The white belt ranks proceed from 5th kyu until 1st kyu. After passing a black belt test, a student is awarded the rank of 'shodan' (first degree black belt) and becomes eligible for examination for advanced 'dan' ranks. Because Aikido is a classical martial art, tournaments are non-existent. Instead, the well executed performance of the techniques, the seriousness and diligence of the student during practice as well as the student's understanding of Aikido principles become the criteria for promotion. In addition, consideration is given to the student's development and application of Aikido principles in the areas of character, conduct and attitude (both inside and outside the training hall).

Rank is an integral part of Aikido. As a beginner your testing helps you formalize what you have learned, provides you feedback on your progress and satisfaction of achievement. As a senior, granting of rank acknowledges your continued contribution to the promotion of the Art. Usually your instructor or senior Yudansha will suggest to you that it is time for you to test for the next rank. You are not required to test, but your seniors' suggestion implies that testing is something you should think about. If you have not been advised to test and you have achieved the minimum time required between tests, and desire to test, you may approach a Yudansha and discuss this with him/her.

The current grading requirements by the Canadian Aikido Federation can be found here or here . Before you may test, you must complete appropriate forms and make a payment (ask a senior member of the dojo for more details).

You should ask one of your peers to act as your Uke. Your Uke should be no more than one kyu rank above or below your current rank. Sensei may assign you one or more Ukes, but you should always have one pre-selected and available at your test date.

Students are not allowed to test at seminars without prior permission by the Chief Instructor of the dojo. All testing and processing fees should be paid, and the application form completed and signed. The testing application form requires your instructor's signature. You should discuss your desire to test at a seminar or summer camp with senior Yudansha and instructors at least two months prior to the testing date, for appropriate guidance, preparation, and the Chief Instructor's permission. For dan tests, you should discuss it at least six months in advance.

In Aikido we seek to create an atmosphere of respect for the art, the dojo, and each other. In the beginning, the student may feel uncomfortable with the culture and customs of a traditional Japanese martial art. It may be helpful to note that etiquette forms and protocol help to psychologically prepare us for learning and help provide safety and productivity for all members. But more important than the superficial observation of any form is the sincere and open-minded attitude toward training which gives meaning to the forms. The intention of this dojo is to create a formal but enjoyable environment where the benefits of Aikido practice can be realized. We welcome comments and suggestions as to how we might better provide such an environment.

If you have any questions or concerns, please feel free to speak to any of the senior students.